Located in the extreme northeast section of the South Bay, bordering the East Bay and Fremont, Milpitas was first inhabited by the Tamyen, a linguistic subgroup of the Muwekma Ohlone people who had resided in the San Francisco Bay Area for thousands of years. The corporate headquarters of SonicWall, Maxtor, LSI Corporation, Adaptec, Intersil, FireEye, Viavi and Lumentum (formerly JDSU), KLA-Tencor, and View, Inc. sit within the industrial zones of Milpitas. Flex and Cisco also have offices in Milpitas.

Milpitas is divided into three sections by Interstates 680 and 880. To the west of I-880 is a largely industrial and commercial area. Between I-880 and its eastern counterpart freeway, I-680, is an industrial zone in the south and residential neighborhoods in the north. Other residential neighborhoods and undeveloped mountains lie east of I-680. Milpitas has no concentrated downtown "center," but instead has several small retail centers generally located near residential developments and anchored by a supermarket. The so-called "Midtown" area, the oldest part of Milpitas, has few remaining historic residences and was the only commercial district that existed before 1945. Midtown is situated in the region where Main and Abel Streets run parallel to each other bordered by Montague Expressway in the south and Weller Street at the north end. The Milpitas Civic Center, which includes City Hall, is not located in Midtown, but stands at the intersection of Milpitas and Calaveras Boulevards. The Civic Center is separated from Midtown by the Calaveras overpass. The boundaries that divide major Milpitas neighborhoods and districts include Calaveras Boulevard running from east to west and the Union Pacific railroad, which runs from north to south. The newest retail centers are west of Interstate 880. There are several predominantly Asian retail centers with store signs written in Chinese, Vietnamese, and Korean.

Milpitas' public schools are run by the Milpitas Unified School District (MUSD). Milpitas High is one of the biggest high schools in the county. The continuation school, Calaveras Hills High School is one of the best schools for "at risk" students in the state. CHHS was designated a California Model Continuation High School. Additionally, Milpitas schools have consistently attained API growth year over year. 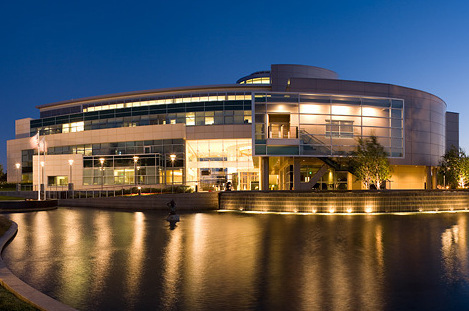